A Green Warbler was trapped and ringed at Buckton just north west of RSPB Bempton on Thursday. There have been seven previous records, the first on the Scillies in 1983, and then a long wait until 2014 when the next was found in Shetland. It is now more or less annual but there has only been one brief mainland bird so this one was bound to attract a crowd, particularly as it was still present the following morning. Apparently it was mayhem as the warbler rarely showed for more than a few seconds and hid for long periods, and a lot of birders left unsatisfied or supposedly ticking a Willow Warbler by mistake.

Rather surprisingly considering the weather conditions it remained into the weekend, so Colin and I decided to go on Sunday morning, as there were a few other decent things around and the Albatross was still visiting Bempton cliffs.

We arrived just before 9.30am and headed along the cliff path to the trapping area where a large crowd was present. Tony Hukin and Mike Illett had staked out the ringing ride where they had been getting close but brief views, and suggested that it showed more frequently on the southern side. I found a spot where I could view into the bushes but the couple beside me suggested that the willows were problematic so I moved further right and higher up. Here I was able to look down into a small crab apple by the (hidden) pond and it didn't take long for the Green Warbler to pop up and it sat in the apple for many minutes preening. Views were incredibly good in the scope and while it spent most of the time facing us a couple of times it sat side on showing the faint wing bar. It eventually flew back into the bushes and there was a bit of a wait before it reappeared in one of the willows, this time well out in the open, but too distant and mobile to attempt photography. Colin was a bit further down and closer and seemed rather happy with the views so we decided to head back to the car.

I had to stop on the way to snap some of the Gannets. 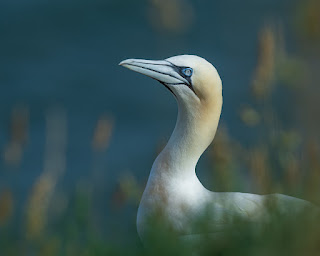 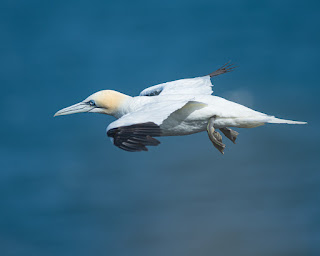 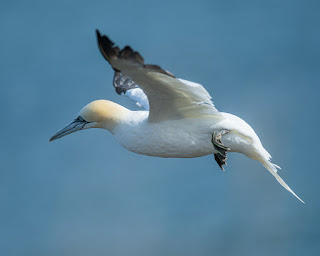 Unfortunately the Albatross had departed early morning and didn't return until the afternoon so we missed our back up bird.

We called in at RSPB Blacktoft Sands in the afternoon to see the long staying White Tailed Lapwing. There have been six previous records and we made the long drive to Caerlaverock in 2007 for the third (and first twitchable) one. That one showed quite well but remained distant and my photos left a lot to be desired.

The Blacktoft one was a bit more obliging and was the closest bird from the aptly named First Hide. There was a decent supporting cast ofmany  Ruff, Black Tailed Godwits, Snipe, three Marsh Harriers and lots of juvenile Bearded Tits. It has been a long time since we had visited the reserve so it was nice to get reacquainted with it. 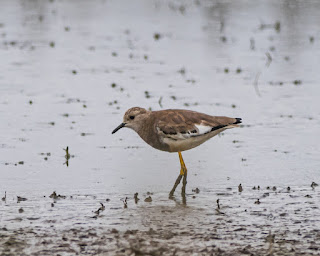 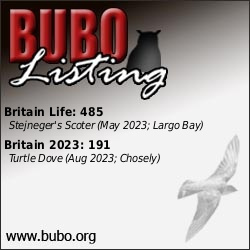