Popped down to Norton green for an hour this morning. The place hasn't had the usual coverage this year with lock down etc, but over the last few weeks the regulars have been reporting migrants. Whinchats Wheatears and Yellow Wagtails have been recorded over the last week so it it would be worth a visit.

Tony Hukins car was there when I arrived and I eventually met up with him. The usual access point on the bank is terribly overgrown, as is much of the track along the top so it was tough going. When I got to the open section on the west side I could see someone scoping the female Wheatear with Tony approaching. He hadn't seen much else unfortunately so we decided to scour the large rose dominated scrub in the middle. There wasn't a greta deal happening, although sunny and warm, there was a bit of a chilly northerly breeze which seemed to be keeping things down.

One Whitethroat was the best I could manage, with the occasional Robin, Wren and Blue Tit. On a couple of occasions we had brief sightings of 'something' perched up in bushes which inevitably disappeared the moment we noticed them and could never be pined down, so it was very frustrating. However after about 40 minutes we headed back to the open area and I got a good but brief view of a Whinchat in a small rose patch which then disappeared. Despite a thorough search of this tiny patch there was nothing.

The mystery was solved when I decided to watch the Wheatear for a while, and saw a second bird with it. How the Whinchat  managed to elude us and then appear in the open 50 yards away I don't know, but there it was on the ground feeding happily. I got a couple of record shots. 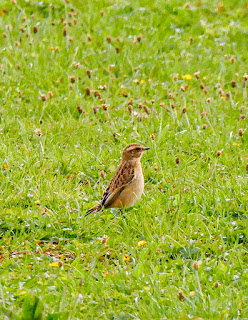